Gorgeous new 'Blingy Bitz' from Craftynotions. That's enough about the weather. I know it is blowing a hooley out there but at some stage we all need a bit of colour and sparkle. I have been bullying poor David at Craftynotions.com to come up with a name for the gorgeous little colourful squares I have been playing with on my latest workshops; occasionally allowing my students to use them, but only if they are VERY good. Think of a square sequin without a hole in and you will know what I mean. I took these images with my phone and they aren't the best. 'Blingy Bitz' will be available from the end of next month in eight to ten colours yet to be decided. I couldn't wait until then to tell you about them. They put a fabulous sparkle onto your work. I iron them onto painted Bondaweb. Yep! I appreciate that will come as a great surprise. Not only but also - (Yes! I have had a glass of wine). There will also be the new 'Blingy Glitz'
2 comments
Read more 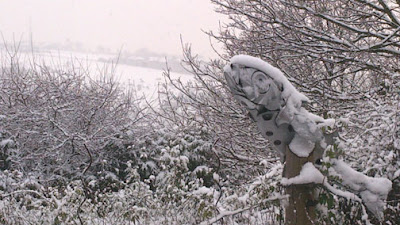 Even my fish sculpture is covered in snow. It started snowing last Friday at about 8am, by 9am I was in my local Asda supermarket, not so much panic buying as 'I'm going to be stuck in the house for a while' buying. I have lived in Brighton for thirty odd years now, and only in the last three winters have we had so much snow. It was unusual as we are close to the sea and apparently the salt in the air stops the snow - not any more . We had about five inches the first day and then three more inches the next day . Living on top of hill I get trapped as soon as the buses stop running up our road .  Having been caught out with very little food last year, as soon as it started to snow, I was off to do 'the big shop'. I was not alone - by 9.30am the queues were six people deep. It was like Christmas all over again. Everyone else obviously got stuck in their houses as well last year. We still have loads of snow but most of us in Brighton can get out and abou
4 comments
Read more

A great - and colourful, weekend! Claire's wonderful zingy ginger cookies.  The weekend was fast and furious and started on Friday night with The Old Needle Works Christmas/New Year party. It was great to see everyone again - it had been quite a while since we had all been together. There was lots of excited chat and of course fabulous food created by The Crafty Cafe. Our wonderful leader - my dear friend Brenda Killigrew.     The wonderful Linda Lavin who does her best to keep the office (and Brenda) under control.     The seemingly inexhaustible Sharon of The Crafty Cafe,     . . .  and the lovely Joan who does more than anyone realises for everyone else - she is a STAR!!!  The party finished at a reasonably sensible time as we all had a busy weekend ahead with several classes due in. The Old Needle Works like many thousands of businesses was flooded not once but twice - the second time just after the the floors had been made good from the first flood. This has been
1 comment
Read more

Oysters, a wall of chocolate and chandeliers!!! 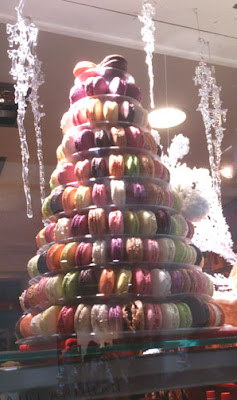 A mountain of brightly coloured macaroons. Well, I am now back home, had the parents and my gorgeous sister over for tea and it's time to start revving myself up for a busy week. I wanted to show you some more of my time in France with my good friends Sue and John Culligan. Sue and John live i n an old stone farmhouse in the heart of the Charente-Maritime in t he tiny hamlet of Le Verderie, close to Brizambourg. It's all very rural and lovely. A great place to rest and also to have a great time. Sue and I went to college together many moons ago, so we know each other VERY well. Sue and John run a chambre d'hotes and Sue is the owner of Knitting Holidays in France www.knittingholidaysinfrance.com and is the pattern editor of Knitting Magazine. She is also the author of several books. I have such clever friends. After several days of dog walks and fantastic food (and much lounging about) we all spent the last day in Bordeaux, about two hours South from Le Verd
Post a Comment
Read more 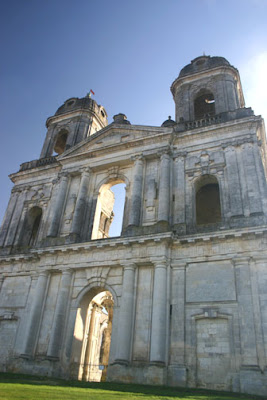 The Abbaye at St-Jean D'angely Happy New New to you all, I hope you had a relaxing time over the Festive Season??? I expect a lot of you will be returning to work for a rest! I am in the  middle of my annual New Year trip away to visit friends either France or Spain. This year it is France. We arrived in France at Bordeaux airport on New Years Eve and had to wait for a couple of hours for my friends to collect us so we took a train into Bordeaux for a poodle about. We didn't see a lot of the city but what we did see was very beautiful. There were several Art Deco buildings in the street next to the station. The Cafe Du Levant had a very splendid frontage with lots of gold tile work and Art Deco statuary.    A beautiful Art Deco building. We had flown quite early and were getting hungry so we succumbed to an early lunch of Moules et Fritte. Heaven!  Heaven on a dish.   We had a reasonably riotous News Year Eve with my friend John playing in a local band
Post a Comment
Read more
More posts

Kim Thittichai
I am a textile artist, photographer and author living on the Loop Head peninsular with my 2 dogs, Pops and Fizz. Whist I continue to teach, I am teaching less. I now teach and lecture on Zoom. I enjoy teaching my experimental textiles and mixed media processes, but I am also thoroughly enjoying creating new work inspired by the amazing light on Loop Head and my years of developing new textile techniques. Living so close to the Atlantic Ocean, the light changes every minute. There are remarkable sunrises and sunsets. Some subtle - others, well, astounding!! Some days it is just - grey! But what greys. The layers of light between the tones of grey are beautiful, and when the sun shafts through different areas of the sky, it takes my breath away. 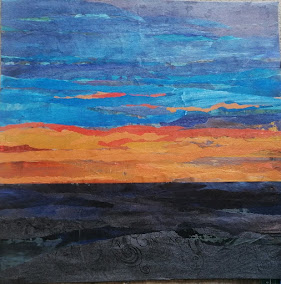 I am very proud to be represented by this fabulous gallery.